It is my last day in Hamilton so I put it to good use.  I went to have a look at the Emily Carr Exhibition at the Art Gallery of Hamilton.  It is on until October and costs only $10 to go and see it this fee also allows you admission to the rest of the gallery.  If you don’t have $10, the gallery also has FREE nights on the first Friday of each month for those readers who have a very tight budget, but still want to see the show.

One of my personal favourites, Scorned as Timber, is there.  I always hoped to see this one day face to face instead of just in books or on line.  I did not know it was there, and when I walked in and saw it, I was stunned.  I sat in front of this one for a long while.  Truthfully, photos don’t do it justice because you don’t see the movement in it the same.  It is breathtakingly lovely! 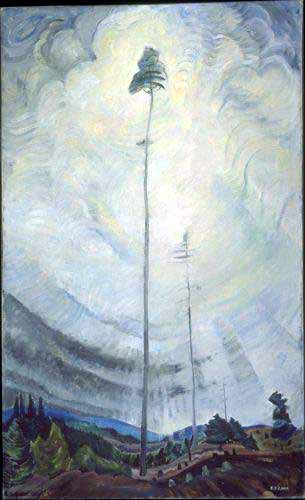 I really liked the experience I had today.  I should add that  I also particularly enjoyed seeing Zunoqua of the Cat Village.  Oddly enough, I never caught the humour in this image until I saw it today.   I was also surprised to see that the gallery both rents and sells original contemporary works.  I do not know if this is new or if I just failed to notice this before.

After seeing the show, I walked over to the Jackson Square Farmer’s Market and purchased some fresh produce to make dinner.  I have a few things in my own garden here but not enough to hit all the colour groups.  I bought some white eggplant because I thought they might be interesting.  Pretty isn’t it?  I think Emily Carr would have liked this for dinner even though she was a meat eater.  Probably more so if someone else cooked it.  She got so sick of people eating up her time on chores when she ran the boarding house “House of All Sorts”.  Anyway, as for my dinner, it is in the oven, and I bet you that it looks even better when I finally get it plated.

Along with these veggies, I also purchased some fresh whole wheat pasta, grape seed oil, kohlrabi, freshly made pesto and some pine nuts too because I like to have a few whole ones.  I am cooking all of it and will mix it all (except the kohlrabi) together as one huge roasted vegetable salad.

As for the Kholrabi… I boiled it and then burn it a little and reboil to carry the smoke through – add grape-seed oil, good quality wine vinegar, fresh ground pepper and salt.  Yum.

Don’t worry, I won’t eat this all alone!  My husband is still in Kentucky but will return late tonight so we will have a late dinner of nice fresh food.  It will be cooled by then too so nice on a long and hot day.  Yum, me thinks!  Some for dinner  – and left overs for the road.

When you arrive on Wolfe Island, and turn left off the ferry, not too far down the road sits this lovely Tiny House which is actually a child’s play house, I assume.

Having grown up in the country, I could never understand people’s reluctance to move kids to the country because there is “nothing to do”.  Nonsense!

In this little image alone, the little girl in me can find at least a hundred things to do.  The grown up me too.

I hope that the owners of this beautiful place did not mind my laying on my tummy in their lawn to get this angle?  No one yelled at me anyway.

The bench faces out toward Kingston to Lake Ontario.

What I am after in this painting, is the simplicity of Anna Mary Robertson, the solitude of Lawren Harris, the movement of Emily Carr and the light of the Dutch Masters, the mood of the impressionists and the story telling of Douglas Coupland… not asking much of myself, am I?

As you know, I am not at Tiny House Ontario at the moment.  I am simply in limbo waiting, waiting, waiting for the thaw to come.  When the days come up above 12 consistently, I will go.

These days, I fill the hours with painting, reading and writing. Since the new year I have read quite a bit, but for the most part I am concentrating on the life works of the painter/writer Emily Carr.  Today, I read the story about her beloved pet rooster Lorum.  Emily was not the only one who kept pet poultry when she was a child.  I also did.

The chicken came to me when my father’s twin brother Bob saw a cage fall off of a truck load of chickens who were bound for market.

I was about six years old when he came carrying the poor pathetic thing in it’s banged up cage, over to the barn.  He told my dad that the poor chicken had fallen hollering and she was still hollering.  Dad said to put the hen in the old hen house and he told me to get some grain and water for the creature.  It was the first chicken that had been there in my life because my family did not keep chickens for many years.  The lovely red chicken coop was simply used as a play house for me.  I loved to swing on the roosts.

I followed uncle Bob out with a scoop of grain.  I was too small to carry both still, and I was also quite keen to see the chicken arrive in it’s new home.  Uncle Bob set it on the ground and said, “well, I guess this is your chicken now”.  I was very happy about this.  I liked her round gold eyes and the way she looked at me and tilted her head.  I liked her red cone and her shiny feathers.  Uncle Bob fiddled with the cage while I talked to the chicken.  I asked “what is your name little chicken?”  “Buck-Buck” said the chicken.

Buck-Buck was an ordinary white hen, probably a Bantam.  She was scrawny and rather beaten up looking from her terrible fall from the truck.  But right from the beginning that funny little chicken did not want to leave my side.  Everywhere I went, that chicken followed me like a dog.  I already had a dog, named Doc, and an orange cat, named Marmalade who followed me.  Another fan, who just so happened to be a chicken did not feel funny to me at all.  I was simply accustomed to the company of animals.

My mother did not like Buck-Buck and did not call her by her name, she preferred to call her “that God-damned lousy chicken”.  Still I managed to sneak Buck-Buck, and her lice, into the house from time to time.  I would dress that poor chicken in doll clothes, just like I did with my cat and the barn cats too.  I would never be able to keep Buck-Buck in for long.  I would get caught eventually, because but I was small and I would sometimes forget, or Buck-Buck would say her name just a little too loudly and mom would start hollering.  When I got caught, the trio and I would run out of the house to hide from Mom’s wrath, and we would be off on another adventure.

At night, unless I was very sneaky and got Buck Buck in bed with me, I always had to lock her into the chicken house before dark.  One night I forgot to do it.  I had been having a sleepover next door at my Grandma and Grandpa’s house which was always lots of fun.  They always had treats, they paid a lot of attention to me, and spoiled me with their great love.  In the morning as soon as I thought of it, I went out looking for old Buck-Buck who was doing a pretty good job at hide-and-go-seek.  I called and called the chicken but she would not come out of her hiding spot.

I looked and looked.  I ran out into the fields with Doc and Marmalade, we all called Buck-Buck but she never came and she did not answer either.  We went a way back into the corn field and Doc led me to a small pile of shiny white feathers.

I ran back to the farm house and told my grandparents, who explained to me that Buck-Buck had probably been eaten by a fox.

Poor Buck-Buck, I said, and I cried for that poor little chicken because I loved her.  Someday I will meet her at the rainbow bridge and together again we will be.

I believe that Emily Carr is the most famous female painter who has come out of Canada.  I became interested in her work, during the winter break of 2011, about a month ago. When I started looking in at her, I found that she was a writer, which I had not known.   When I discovered this, I went to the library, picked up her books and started to read.  I have just finished reading This and That: The Lost Stories of Emily Carr and I am currently reading The Complete Writings of Emily Carr.  Through this process it has become clear to me that she and I share more than a few commonalities beyond the obvious: artist/writer.  As a matter of fact, we are weirdly similar.  I find it particularly strange that we share so many parallels, because of the huge differences in the periods that we have lived.

With my interest fully piqued, I went to Hamilton Public Library a few days ago and I picked up Emily Carr a monolithic book about her and her works.  I intend to read next this next, but had not really looked at it until a few minutes ago.  I opened the book and I cannot begin to tell you how totally surprised I was!  There, inside the jacket, I found a huge photo of her her sitting on the stoop of her Tiny House with her four dogs (and her monkey) all around her.

I have to say that while the hundred little idiosyncratic similarities are strange and interesting, finding that we are both Tiny Housers with a whole slew of dogs, is a huge parallel by anyone’s standard.  Very few people ever have their own pack of dogs… and of those who do, I bet that I am the only tiny houser (outside of her) who does.

What about Emily’s Elephant, that Lawren Harris called “swell”?  Of course, this is the name that she gave to her Tiny House on wheels.

Reading now, Hundreds and Thousands, Emily has just returned from a the summer in the Elephant (which she also calls “the van”). She says something which I certainly identify with as I am sure will all other Tiny Housers. “The roof seems low and heavy and the walls squeezing us. Yet the house is enormous after the van. But the van was so much nearer the big outside, just a canvas and a rib or two and then the world. And the earth was more yours than this little taxed scrap which is under your name.”