One time many years ago, when I first arrived to live there, I got lost in Munich Germany.  After work I was tired and not paying attention so I wound up on the wrong bus.  At that time I could barely speak a word in German and no one seemed able to help me, so I got off the bus and walked where I thought we had come from.  After walking for a while, I came along to this little cottage style house with a white picket fence all around it.  The entire large garden was landscaped to look like a magical land for gnomes.  There were gnomes doing all sorts of things.  They were crossing little bridges, sitting having tea, digging holes, having picnics, having concerts, fishing, drinking beer, picking flowers – you name it.  The gnomes were doing all the things that gnomes might be doing in a magical little land just beyond the fences of our imagination.

Before that point I had never given any thought to gnomes, but on that day I started to think that there was something magical about them.

I looked for the place many times afterward but was never able to find it and I also can’t find it on the internet.  Today in this age of internet posts one would think that these “Munchner Gartenzwerge” would have at least one shot of them but so far, the ones I find are not of this magical place.

With this in mind you may understand why, when I saw a complete set of Snow White and the Seven Dwarfs for sale for $85 on Kijiji that I made the purchase.  Not only are dwarves similar to gnomes, but they live in the forest and while I am not the fairest in the land Snow White and I share many commonalities.

I had to laugh to myself when bringing them out to THO.  I mean five seat belts in the car and there were me, Hj, five dogs plus Snow White and the Seven Dwarfs.  Try explaining that to the police; thankfully we were not pulled over.

The photo is busy but here they are now at home.  I still have a lot of collecting to do to finish this perennial fantasy garden, but it is coming along. 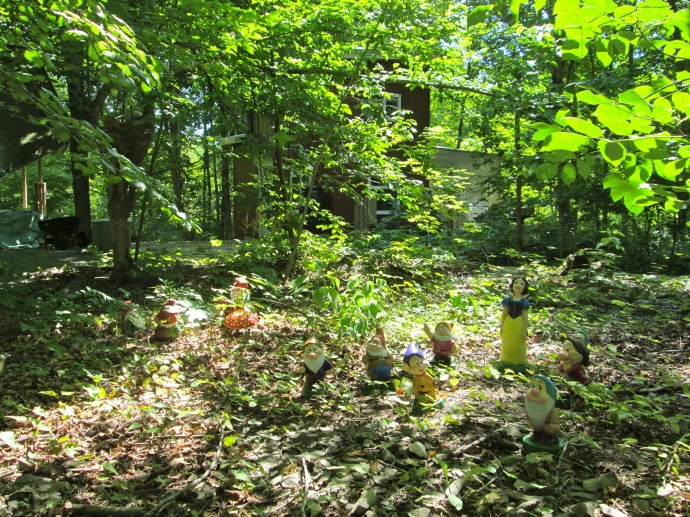 Today I saw a video that I think is very wise.

I thought this was a beautiful reminder of how we can invite simple blessings into our daily life.  Also, it reflects, on natural abundance.

3 Legged Joe, A Show and Snowshoes

I will leave for Tiny House Ontario tomorrow morning after rush hour.  I am going for a few reasons this time.  Firstly, I am picking up Joe the three legged street cat in downtown Toronto and driving him to his Foster Home in Kingston Ontario.  Poor old Joe was one of the disposable pets out on the street, due to his injury it was extra hard for him to survive.  He was rescued in cooperation with Annex Cat Rescue, Project Pet Rescue, and Kingston Animal Rescue.  He has been vetted, neutered and will be up for adoption once he is rehabilitated.  You can read more about Joe here, or if you are interested in making a donation to help with Joe’s vet bills or his care please do so with one or all of the agencies listed and linked above.  Perhaps you would like to adopt him or another homeless animal?

I am also heading to Kingston because I have a show in Battersea Ontario at the United Church.  They have invited local talent to come to show and sell their items.  The show will be on November 30 from 9-5.  I am excited to do this show because there is a lot of free and close parking so I expect a lot of my friends and family to be there.  For a lot of people getting into the downtown for market days is just too difficult and stressful, so it will give me an opportunity to show my work to members of my family, and friends who have not yet seen it live!  Art work is so much better in person!

Please do come to the show to see the local talent if you are anywhere nearby.  Admission is just $5 and I bet you will be able to find wonderful unique gifts for a reasonable cost there.

My most recent work Grandma’s Gift will be shown for the first time.

I am also of course visiting my house and I am very excited about this!  We have snow in Kingston now so I will bring along my snowshoes!  My cousin Tracey took this photo this morning and allowed me to share it.  I look forward to getting out into the magical forest and seeing the changes that Mother Earth has undergone!

In early September I took a photo of some flowers that were blooming along the edge of the fence at the tiny house.

Tiny House and Porch – The house has a relatively HUGE cloth porch, the perfect place to sit outside but be free of biting insects that are plentiful in the Ontario forest.

When I arrived back four weeks later, on the last day of the month I found that it was fall in the area.  I also found that finally my dahlia had bloomed.  The flower is so huge that the plant could not hold it up, so I posed it for the photo.

The sunflowers were eaten quite some time ago by the little garden thieves but one sole teddybear variety did not become a midnight snack.  I was surprised to find it there, hanging like those in J.E.H MacDonald’s  “the Tangled Garden”. It might be fun to paint this one.  The natural world is alive with change. 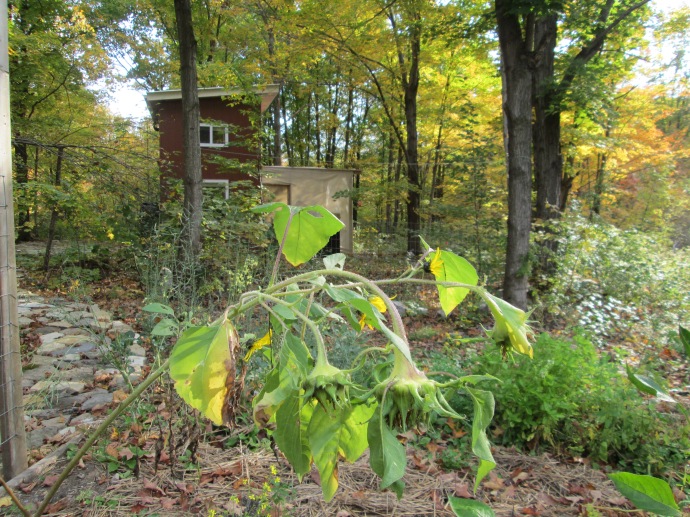 Sitting here over the last couple of days and wondering if some money will fall from the sky so that I can finish Tiny House Ontario’s kitchen.  I really do not want to appear as a want-want… it is not that honestly, it is just that it would be nice to have it finished up before I pack up in the fall.  I have been without a
kitchen now for three years.  It would be nice if things were just a little handier because in the winter it is difficult to live/stay here without some indoor amenities.

A sponsor would be awesome someone who makes tiny propane appliances.  How do I find one of these? 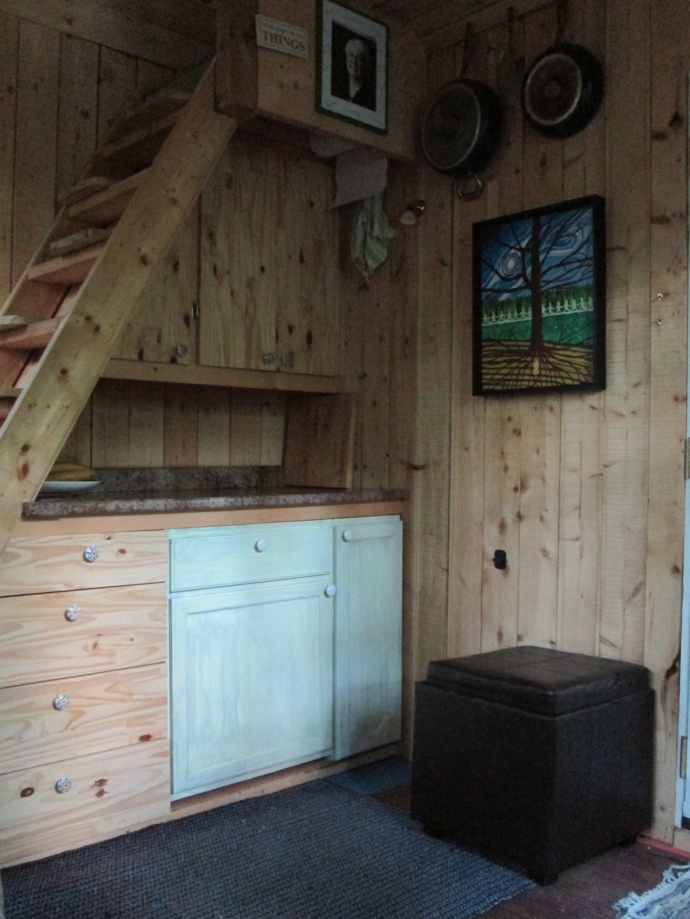