I believe that Emily Carr is the most famous female painter who has come out of Canada.  I became interested in her work, during the winter break of 2011, about a month ago. When I started looking in at her, I found that she was a writer, which I had not known.   When I discovered this, I went to the library, picked up her books and started to read.  I have just finished reading This and That: The Lost Stories of Emily Carr and I am currently reading The Complete Writings of Emily Carr.  Through this process it has become clear to me that she and I share more than a few commonalities beyond the obvious: artist/writer.  As a matter of fact, we are weirdly similar.  I find it particularly strange that we share so many parallels, because of the huge differences in the periods that we have lived.

With my interest fully piqued, I went to Hamilton Public Library a few days ago and I picked up Emily Carr a monolithic book about her and her works.  I intend to read next this next, but had not really looked at it until a few minutes ago.  I opened the book and I cannot begin to tell you how totally surprised I was!  There, inside the jacket, I found a huge photo of her her sitting on the stoop of her Tiny House with her four dogs (and her monkey) all around her.

I have to say that while the hundred little idiosyncratic similarities are strange and interesting, finding that we are both Tiny Housers with a whole slew of dogs, is a huge parallel by anyone’s standard.  Very few people ever have their own pack of dogs… and of those who do, I bet that I am the only tiny houser (outside of her) who does.

What about Emily’s Elephant, that Lawren Harris called “swell”?  Of course, this is the name that she gave to her Tiny House on wheels. 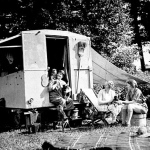 Reading now, Hundreds and Thousands, Emily has just returned from a the summer in the Elephant (which she also calls “the van”). She says something which I certainly identify with as I am sure will all other Tiny Housers. “The roof seems low and heavy and the walls squeezing us. Yet the house is enormous after the van. But the van was so much nearer the big outside, just a canvas and a rib or two and then the world. And the earth was more yours than this little taxed scrap which is under your name.”