Like everyone else in the world people who live in Tiny Houses wear things out.  My husband’s jeans and my slippers are proof of this fact.

I decided that these could have their lives extended with just a little bit time and effort, so I got the tools I need to do the job.

To fix the slippers which have just a small hole – I used a darning technique that Grandma, Violet, taught me.  Simply… turn what needs darning inside out, knot the thread to the edge of the hole then sew with small stitches close to edge all around it.

If I were darning a large hole I would not have done this, but in the case of this little one – on stretchy slippers, I just pulled the thread, stitched down the lump and tied a knot.  This took me less than a minute.

Working inside of pockets is a bit difficult so I used an iron on patch and then hand stitched it to make it more secure.  I thought the hole looked cooler than the patch being on the outside so I decided to leave this showing.  After ironing it on I used small stitches all around the hole and then again all around the patch.  This took me about seven and a half minutes 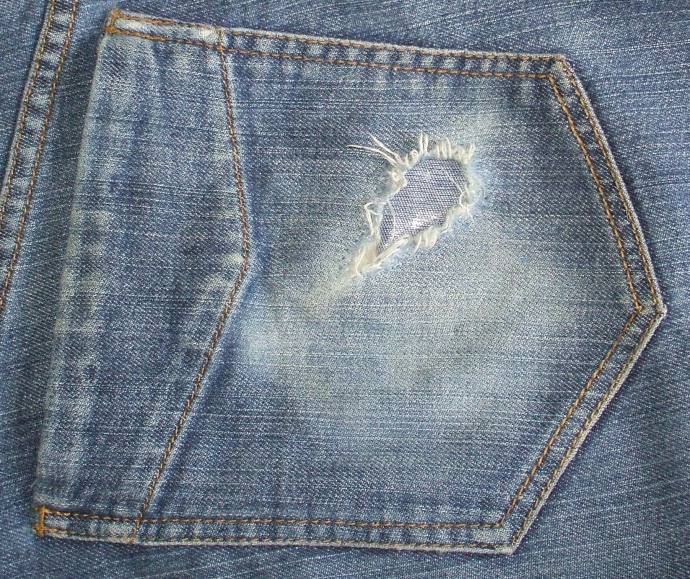 I know that this is not exactly tiny house related, but it does save me money and time.  I don’t have to buy others right away and I used far less time repairing what I already have then I would have used going to the store to find new slippers and new jeans.  As well, I reduced, reused and recycled which is a lot to do with with the tiny house, tiny footprint morality.

So… if you are a math-E person like my husband you are probably thinking that the time does not add up… you are right.  The task took less than ten minutes, but still I had to get the tools and put them away and this took a little bit of time too.

Okay, so the truth is, I have been holding back on you.  I can sew.  Please don’t tell anyone!  It is a secret because I find that if you tell people that you sew, they always want you to do their mending and hem their pants.  Truthfully, this is not the sort of stuff I like / want to sew and I have a hard time saying no because it really is simple for me… It is just that don’t enjoy it.

What I love to do is projects!  I like picking out fabric, making a pattern and sewing up something from my own imagination when the mood strikes me.

When I was first out of school I worked in a dry cleaner’s as a seamstress, so I was a professional seamstress at one time.  More than this, I can draft patterns,  tailor a man’s suit jacket and sew things as complex as a wedding dress.  I had very accomplished teachers!

Anyway, a while ago, my friend D mentioned that she needed a crate for her dog and on Sunday a rescuer friend L gave me a heads up about a crate for $10 at the Salvation Army, so I skipped down and picked it up.  I decided to pretty it up as a Christmas gift.  I made a cover, a cushion and two matching little blankets.

I think this beats a Christmas gift from the mall, hands down!

As things turned out D did not need it after all, but there was a terrible fire on King Street and a woman named Jen lost everything including her dog crate.  Synchronicity?

I brought it over for her dog Riley.  On the way I stopped at Pet Value on Wilson Street in Hamilton to get a few other things too.  I told them what I was shopping for and they handed me a nice big bag full of treats and food!  Yeah Pet Value!  You really rocked the day for Riley and his mom!