Okay, so the truth is, I have been holding back on you.  I can sew.  Please don’t tell anyone!  It is a secret because I find that if you tell people that you sew, they always want you to do their mending and hem their pants.  Truthfully, this is not the sort of stuff I like / want to sew and I have a hard time saying no because it really is simple for me… It is just that don’t enjoy it.

What I love to do is projects!  I like picking out fabric, making a pattern and sewing up something from my own imagination when the mood strikes me.

When I was first out of school I worked in a dry cleaner’s as a seamstress, so I was a professional seamstress at one time.  More than this, I can draft patterns,  tailor a man’s suit jacket and sew things as complex as a wedding dress.  I had very accomplished teachers!

Anyway, a while ago, my friend D mentioned that she needed a crate for her dog and on Sunday a rescuer friend L gave me a heads up about a crate for $10 at the Salvation Army, so I skipped down and picked it up.  I decided to pretty it up as a Christmas gift.  I made a cover, a cushion and two matching little blankets.

I think this beats a Christmas gift from the mall, hands down!

As things turned out D did not need it after all, but there was a terrible fire on King Street and a woman named Jen lost everything including her dog crate.  Synchronicity?

I brought it over for her dog Riley.  On the way I stopped at Pet Value on Wilson Street in Hamilton to get a few other things too.  I told them what I was shopping for and they handed me a nice big bag full of treats and food!  Yeah Pet Value!  You really rocked the day for Riley and his mom! 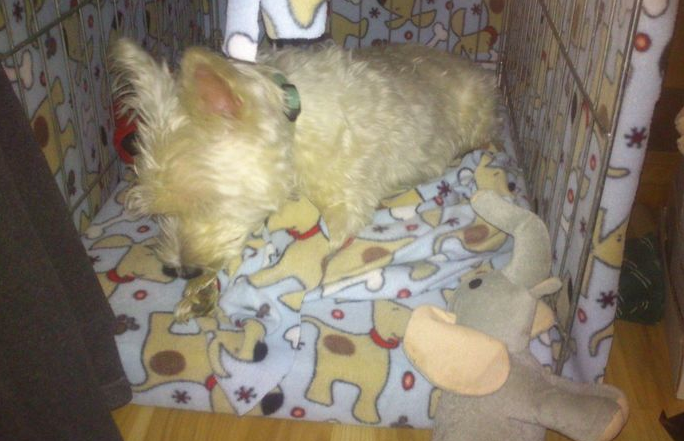