Two weeks ago Jill wrote to me.  The note she sent was both surprising and hopeful.  In fact, it brings the tiny house movement in Ontario to the cusp of a new era!  We have finally had our first real, significant and open bite that Ontario has had from a community.  She enquired with the city and apparently, Kitchener is open to having a tiny house community, the only problem they have is that they have NOT been approached by a developer.  So… knock, knock, knocking now on the doors of developers!

If there were a community there, my husband and I would seriously consider this.  We are currently still tied to this area, because of my husband’s work, so it would mean selling our house and building another tiny house to live in.  My list of wants for a tiny house community would be: A central shared building with laundry, a full kitchen and common room for community gatherings, a classroom and a guest room or two so that we could run classes.  Full hookups for sewage, water and power (even if we choose not to use them), a community garden space, private fenced lots of roughly between 15x 30 and 30x 50 feet for each house (good fences make good neighbours and they also keep pets safe), and I think each lost should have a shed for storing off season clothing, sports equipment, hobby and outdoor items, gardening tools.

Personally, I would also like to be a part owner in such a development.  In that, I would not like to lease or pay rent on the land for the rest of my life.  I would strongly prefer for all of us who would potentially live there to be the land owners.  What I mean is that I would like the developer to organize this in such a way that the lots are each privately owned and that we each own a share of the common spaces and everything is decided through the voice of a common not for profit board, similar to a condominium structure, which is to say that we would still have a fee to pay for common needs such as building repairs to the common structure, snow plowing, land taxes and all other common expenses of the community. 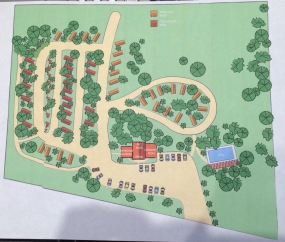 Lastly… Do any of you know a developer who would be interested???

If you don’t know the city, here is some information About Kitchener