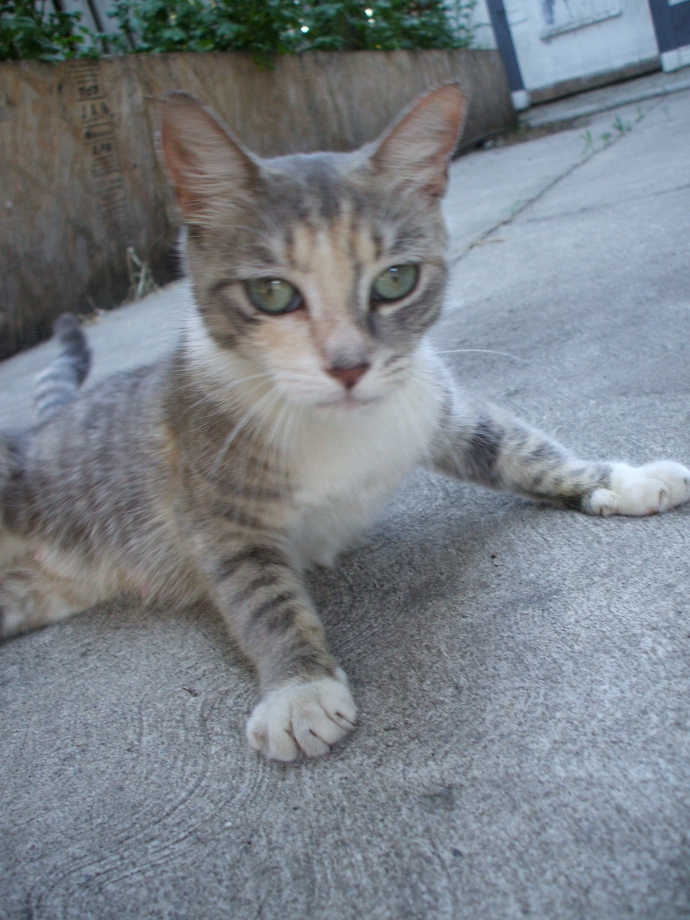 I am sorry to let my readers know, Mama the feral cat that I wrote about in early August was hit on the road in front of my Hamilton house on Friday at ~ 6:00 am.  We brought her to the Burgess Emergency Vet, got her some good pain medication and had x-rays done.  She was totally broken up so we had her euthanized.  The problem was not the cost of recovery but with her being totally feral.  Even if she were to be operated on, and repaired, the vet explained that she would need daily pain medication and care for the next eight months because among other things including internal injuries, her crushed pelvis would need to repair itself.  Due to the fact that Mama would just as soon bite you as look at you, this would be an impossible task.

The next issue is her three kittens.  They are about 10 or 11 weeks old and thus weened but two calicos mean that there are two more females who can add to the feral population and because we live downtown there are vehicles everywhere, including ambulances rushing to the hospital.  I hate to see them suffer a fate like this.  “A stitch in time saves nine” are words that my grandma often used.  In other words try to deal with things before they become a problem.  So, I put out word to my community here, got a trap and a carrier and tried to catch the kittens.   I know that there are some programs here.  A barn buddies program, a feral rehab and homing program, a feral colony on private land up north of here also takes cats after they are fixed if there is specific danger for them.  Too there is a catch/fix/release for feral cats.

I caught the first kitten on Friday night in minutes.

An hour later I caught the next one. 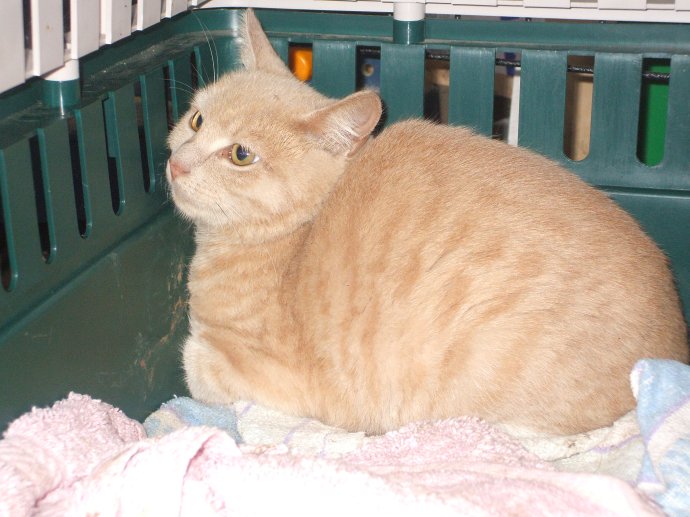 The last kitten was not too keen on being trapped.  But finally on Saturday night when I went to the cage I saw the little grey… 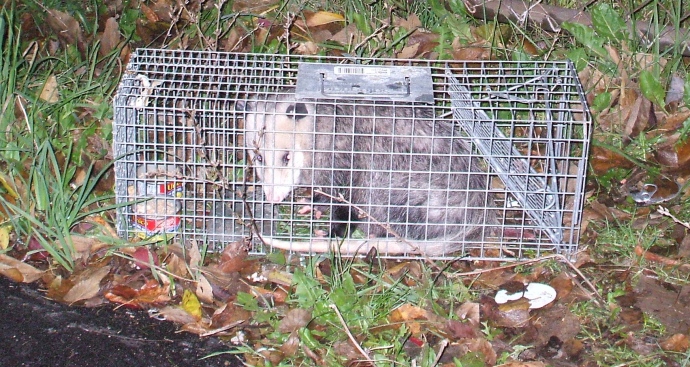 … well large… grey opossum looking back at me.  They are not native species here, but recent immigrants.  A lot of people here have never seen them, including me.  So it was sort of an ordeal.  Contrary to what I read about them, this one at least seemed pretty happy to see me and accepted my opening the trap and letting her/him out with no aggression at all.  Just squeezed out of the opening and waved its tail bye-bye as it disappeared into the former inlet.  Still, the last kitten seemed to understand that I was trying to take its freedom and would not go into the trap to get the food I left for her.

I asked all those who feed the feral colony to please not do so on Sunday, and so, in the evening when I went out the kitten was waiting in the spot where we feed them, I set down the cage and took a few steps away and she walked right in.  I gave her back to her siblings and then brought food out to the colony as well as to the skunk an opossum who we also apparently feed.

All three of Mama’s babies are safely housed in a 4x4x4 cage in my shed with two carriers made up as beds.  They have food and water and we now wait for the agencies that are involved in helping them to get back to us.

I heard that about 3000 cats met their death last year just in our local SPCA.

I urge you to please fix your pet and also to take a proactive stance on your local feral cats.  Find out if you have any catch and release programs in your area and have the wild cats fixed.  After all human beings have caused this problem.

Letter back from Hamilton Burlington SPCA this morning – pasted below… now what?

Unfortunately our Trap Neuter Release program is closed to new applications for this year.  With the Winter approaching we have closed the program and will start accepting new applications in the early Spring.  You may be able to find a Vet that will be able to do them at a reduced cost, I would suggest calling around to a few different ones and see if anyone is willing to help.  At this point we are also not accepting anyone new into our Barn Buddies program as we have a number of cats that need to still be placed and not enough people with barns who are looking for a buddy.

You may want to try contacting some local rescue groups in the area to see if they would be able to get the kittens spayed/neutered through vets that they use.

Sorry we could not be more help at this time.

Just went out to check on the kittens – the cage is empty. I guess my crappy eye sight it was latched but not in the catch. Three little feral siblings are at large again… Sigh.