Anyone who reads my blog knows I don’t endorse products nor do I have any advertising.  Simply put, I think as a tiny houser, I have to walk the talk.  I am of the opinion that we tiny housers are stepping away the consumer lifestyle than we should not promote consumption.  Still, there are things we need and tools are one of these things.  I personally believe in buying the best quality so that they last for a long time.  I think if you buy a tool that lasts then you don’t create so much garbage.  I have, for this reason always trusted the Makita brand.  This is my personal choice and one I have always been happy with.

Today for the first time in almost fifty years, I nearly changed my mind… but then I was reminded why it is that I chose them in the first place.

Here is what happened:

It was mid October of last year when my old Makita cordless drill bit the dust.  It was the fourth Makita drill I have had in my lifetime and I have been using tools since I got my first job putting up drywall when I was 15. Of the four I had, one got melted on the wood stove and another was stolen when it was really new, so technically speaking I only wore out 2 drills.  This really is not bad considering that I have had 34 homes in that time.

The product line had grown a lot since the last drill so faced with so many choices, I mulled around for a while trying to decide what I wanted.  It was not just the new products that slowed my decision down but because I am off grid at Tiny House Ontario when I am doing most of my projects, this also had to play a role in my decision making.   Clearly, I wanted to have a drill that holds a long charge but I also hoped to go a little more lightweight.

Anyway, I remember being pretty happy when I went to the Home Depot and found now that Makita is not just making cordless drills but they have a whole line of other tools that are part of the system.  After a few weeks of looking on line and then talking to the sales people I decided on a set that came with a drill and a cordless driver as well as the charger, two batteries and a great little padded carry bag.  It was a major purchase for me at $249. plus tax. 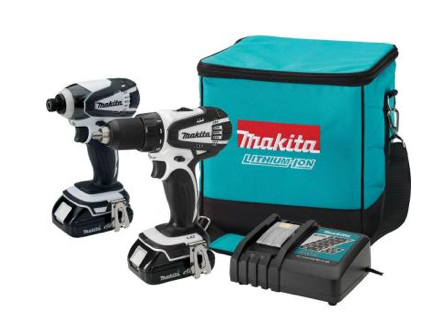 This is the first set, it is a beauty, works great but it doesn’t fit a number of the add on tools.

I brought it home, used it to built a shed and then I got sick…

Roll the calendar ahead almost ten full months to today.  I am finally recovering and decided that I felt well enough to get some shelves put up in my studio so it was time to bite the bullet and add on to the system.  Today was the day to add the Makita cordless circular saw attachment.  At $119. Again this is a major purchase for me, but I also knew that it was something that would come in super handy not just for the shelves for all the off grid DIY I do.  I came home and got my work area ready, familiarized myself with the tool, adjusted the blade depth and then tried to put the battery from my drill in and it won’t fit.  I mean, it really won’t fit.

So I pack the tool back up and bring my battery with me, I go back to Home Depot and spoke to Ron in the tool department.  He also could not figure out why it would not fit and like me was really surprised that Makita had made a system in which some of the parts don’t fit with other parts.  Like me though, he is a Makita tool worshipper and so he said he would speak to the rep about it.

I returned the saw and drove home, I was mad, but what could I do?  I mean, I already had the drill for nearly 10 months, and assumed the receipt was long gone anyway, so I resolved myself to live with it and I would manage again sawing everything by hand.

When I got home, my phone was blinking.  I was surprised to find out it was Ron from Home Depot who had left a message.  He had been on the phone with Mike from Makita and he explained some of the details and he also gave me Mike’s number and suggested that I give him a call.  So I did.

I dial the number and after a couple of rings Mike answers the phone and I tell him what I have already told you and I also added that I was annoyed because now I have a drill set that while great, doesn’t meet my needs because I purchased it expressly because of the add ons.  I also said that I was really annoyed because the drill had cost me $249 and now they have a similar set that comes with everything I have (minus the nice little carry bag) but with a flashlight and with the circular saw I need for $279.  Only thirty dollars more than I paid for mine.

He says, “bring it back and exchange it for the set you want.”

I said, but I have had it since last fall and don’t have the receipt.  And get this, he says, “you don’t need it, just go to the Home Depot and make the exchange.”

So, I get the drill set and get back into the car and head to the Home Depot again.  This is where it gets even better.  They were EXPECTING ME at the return desk.  The set that I needed was there waiting for me.  Mike, who it turns out is the National Account Representative (yes, he answers the phone on a Sunday of a long weekend), happened to be close by so he went to the store, got it all organized for me and left his card.  He said to call him if I have any problems. 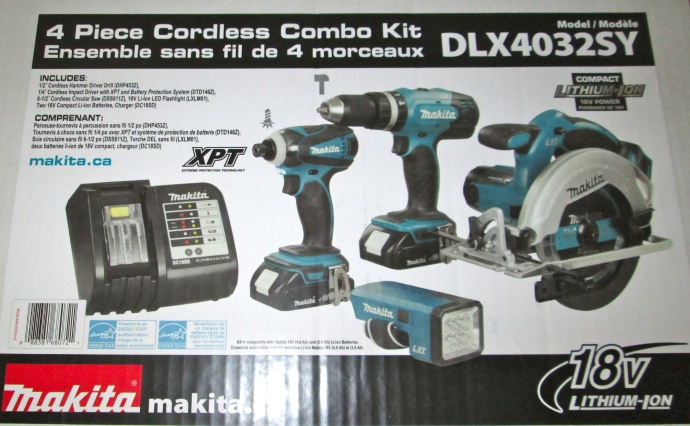 My new set what a beauty

I have to say, I am one very satisfied customer and because of this, I wanted to holler out a big thanks to Ron at the Home Depot and to Mike at Maktia.  You know, I am really going to miss that nice little tool bag, but still I have to say I got pretty sweet customer service today.

I am sharing this not just because I got such great customer service but also as a heads up to any of you who are also facing off grid situations.  There is a compatibility issue.  ***The saws need the bigger batteries, unless you buy a kit like the one I have above, or you buy the drills with the 3 AH battery.

I also wanted to share because in looking at tiny house builds, on more than one occasion I have noticed that there are a lot of Makita users among you.  I thought that I would take a minute to let perspective tiny housers know that this is a tool and a company that  you can trust.