I got tickets to see a number of the Piccaso works.  His paintings are on loan to the Art Gallery of Ontario until the end of the week because their home in France is under construction.  Even though he is long from being my favourite artist, it was great to have the chance to see them while they are so close.  I got the strong impression that I would not have liked the man much even though there are a few of his paintings that I really like.  The one I liked best is Two Women Running on a Beach but the detail of this tiny painting (maybe 8×10?) is lost in all the e-pictures I found on line.  In the original you can feel the women’s exuberance!

I saw a lot of paintings today and I have to tell you quite honestly that the ones that I loved most are the ones by Lawren Harris.  I am biased of course!  I love his work and after walking through the busy and lovely Picasso display there was a double door that said push and when I did I saw The Group of Seven and Emily Carr before me!  I was so excited that I very nearly wept!  I had no idea that they had so many Harris pieces!

One of the most interesting facts about The Group of Seven which is ignored by galleries and the artsy people is that without Canadian farmers these works would not in all likelihood exist in the way that they do.  Lawren Harris who is one of the founding members of the group was the son of the very wealthy  Thomas Morgan Harris – the Harris’ of the Massey Harris industrialists.  The Harris family money came from building and selling tractors to farmers.

Lawren Harris (in my opinion) put his money to fantastic use with this group of artists.  He and his buddy Dr. James McCallum built the group space for them so that they could work (or live) in, and Harris even financed trips for them.  In both 1918 and 1919 he put some of that tractor money to good use and paid for the boxcar trips that took The Group to Algoma to paint!  Can you imagine The Group of Seven works without the Algoma works?  I can’t!  Thank you farmers and Harris too!   Another mitigating factor is that Harris himself never had to work (though he did have a job for about two years of his life).  This family fortune meant that he did not have to be concerned about the cost of canvas, paints, brushes, housing or any life stuff, and with the luxury of both time and money he created a magnificent body of work.

I wonder if all creative people had family fortunes which allowed them to do what they wished, what kind of world we would live in? 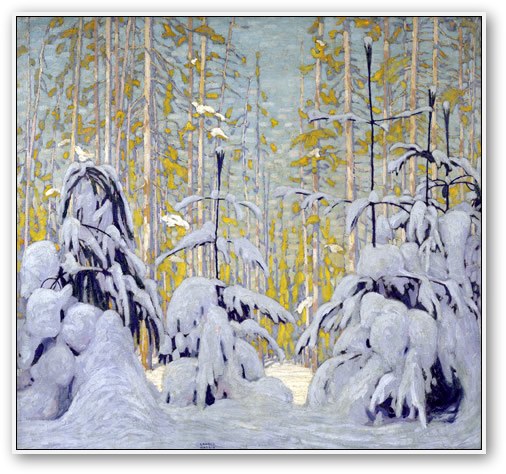