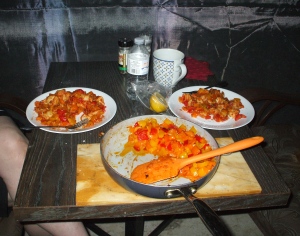 Yesterday My cousin Tracey came from the city, my husband HJ came from Hamilton, and my sister came from Saskatoon and I planned to make a meal for them.  I bought ingredients and then decided while I was still in Kingston that I felt too overwhelmed to make a fuss, so I stopped at the Pasta Shelf in Kingston and picked up a huge vegetarian pasta dish, some extra red pepper sauce, some roasted garlic as well as garlic bread and put it all on the BBQ to heat.

I know it is LAZY, but sometimes one has to allow themselves such conveniences.

The meal was nice, but I could not really eat, actually, only my husband ate well, so over half of the pasta is left over.  I think that this means that I don’t have to cook today either.  Just warm.

So… the problem is that I still have ingredients for a meal for four hungry people.  Having grown up on a farm, I always find that I over prepare food.  This over preparation, always thinking if there are no left overs that people did not get enough to eat, caused a funny situation in my marriage for the first few months.  I would cook big meals and my husband who grew up in a culture where leaving left overs is not acceptable… caused confusion.

I would cook bigger and bigger meals and he got fat a little bit at a time.  Finally, I said, “I think you might be eating too much” and he said, “I think you are cooking too much”.  Turns out that the poor man was in agony trying to get through these meals in order to prove to me that he enjoyed what I cooked him.

A funny cultural difference, I think.  Now I prepare proportionate meals unless I have guests, or I remove what will be for the next meal before I put anything on the table. 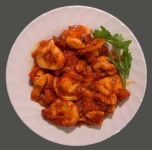