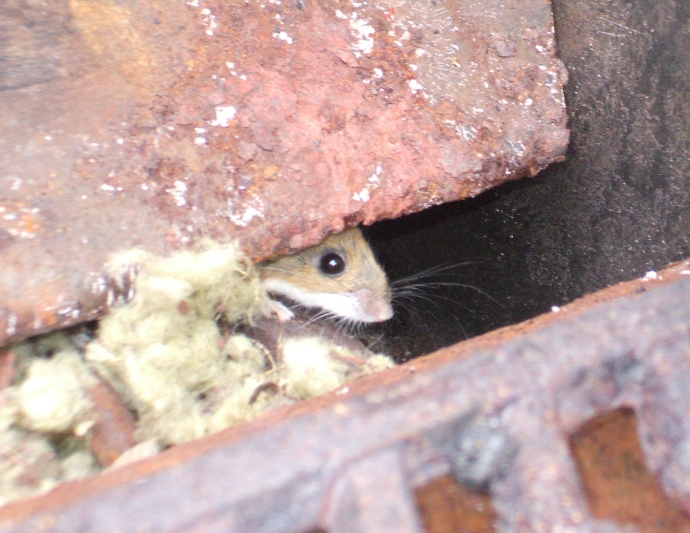 Last fall a Ms. Mama Mouse moved into the BBQ at Tiny House Ontario and because I am a person who is highly concerned about the ethical treatment of animals I left her be.   I also fed her and her family when I went home.  She liked Mary’s Organic Crackers (who doesn’t?) and also the peanuts that Liisa brought her were a big hit, and the shells became part of her bedding after, so these had a HUGE added bonus.  Ms. Mouse came to look forward to my visits and would come out to see what sort of tasty treats were coming her way.  When I peeked in with a treat, she would peek out at me.

Even so, now that it is spring, and this is my main means of meal preparation I had to evict Ms. Mouse.

Since she has come to expect nuts, seeds, she sat watching me, totally aghast, as I took her home apart.  Poor little girl.  I think she even cried a little with me.  It was about half removed by the time she decided to run for her life.

After clearing her out, I turned the BBQ on bringing it up to 500 degrees for a good hour and then allowed it to sit at about 200 for an additional hour in order to kill germs or whatever she left behind.  The BBQ is probably in its last year of life, so I think when this happens I will leave it in the forest for the mice.

It is two days now and so far she has not moved back and seems to have accepted the newly located home that I have made for her.