Tiny House in a big world

Yesterday, I posted about the people I know reacting to my move toward living in Tiny House Ontario and two things happened since then to make me think about perceptions – a little bit more closely.

The first thing is that my beautiful and long time friend, Donna, who lives in Kingston, Jamaica, wrote to me semi-privately about the last post: “I’m a little amused/amazed about the reactions to your Tiny House. People live like that all over the world, happily and joyfully!”  Of course she is correct.  We Canadians have so much space around us that we tend to forget, actually, we really do not know, that people all over the world live in little spaces.

I was oblivious that people would be able to live permanently in anything small until a few years ago when I had an opportunity to visit another beautiful and long time friend Sigita for the first time in Germany.  Then I saw this again when I visited Kafka’s home on Golden Lane in Prague, Czech Republic.  Both of these experiences did not make me want to live in a Tiny House, but they did show me that it is possible to do so, and to recognize that people can, and do live comfortably in small spaces.

Don’t misunderstand me.  I lived in a room when I was a student and I also lived in a tiny (240 square foot) one bedroom apartment when I was a young woman.  But I always saw these smaller places as being temporary – until I could afford bigger, better, more.  I did not aim to live “that” way forever.  The early part of my life was all about saving for a bigger house, and then when I got a bigger house, I wanted an even bigger one.  As a matter of fact, it was my large collection of stuff that made me believe that I needed to have a bigger house.  You know, so that I could put all my stuff in there; just like George Carlin said.  I don’t believe that I am a particularly greedy or unusual Canadian.  I think it is normal for us to expect to own a home when we grow up here.  Perhaps it is part of being a society of immigrants who came hoping for something more and better?

The second thing that made me think about people’s reactions, is that I got my first annual report from WordPress.  I opened it up to read and discovered that I have readers from other places on this planet; this really surprised me!  Given that my blog is only one month and two days old, I already felt pleased at just how many people stop in daily to read about my passion.  I have, to date had nearly 4000 reads, that is about 85 a day, and I really thought that all these reads were my friends and family.  I assumed (because they know me), they are interested in what I am doing.  Or at least worried that I might ask them a question next time I see them.  What I mean, is finding out that other people who do not know me are reading, makes me believe, I should acknowledge there is habitable land outside my own small geographic area.

Now that I know that there are readers from places outside of Canada, I want to be sure that I am not forgetting that to the rest of the world the concept of a Tiny House may be really quite normal.  Also to acknowledge that I come from a position of relative privilege, and I want you to know that I recognize that to a lot of people in the world (including in Canada), having any kind of roof over head is not attainable.  I do know that people live different lives not just here in Canada but everywhere in the world.  I do know and this and this is one of the reasons why the reduction of my footprint on this planet is so very important to me.

So, here you are!  From Canada, USA, Jamaica, Chile, United Kingdom, Romania, Ireland, Netherlands, Germany, Singapore, Philippines and Australia if WordPress got you all right.  Wow!  Thank you for reading!  Tiny House Ontario is just this wee spot which I feel is sort of sacred and I am so pleased to find out that other people feel drawn to it too.  The Tiny House has had such a huge impact on me and it is changing me profoundly still, every day, even when I can’t be there.

Here, I have posted a photo of Golden Lane in Prague.  The Tiny Blue House is where Franz Kafka lived and wrote.  It is much smaller inside than it looks from outside because the walls are very thick.  The map is of those of you who found Tiny House Ontario and again, thank you for stopping by! 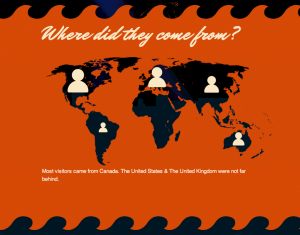 3 thoughts on “Tiny House in a big world”