Another confession: I believe that Garden Gnomes have magical power.  It sounds totally illogical; I get that.  I mean, I understand that they are cement, or resin or something man made and I also know that they are, largely, made in giant factories.  Still, there is something enchanted about (some of) them.

I have not always thought this.  As a matter of fact, until a few years ago, I never gave Garden Gnomes a second glance or even a moment of consideration.   Everything changed about 12 years ago, I was a newly wed and even more newly living in Munich, Germany. I worked for NATO which was all the way across town on Cosimastrasse.  I had just started to learn the language and did not even know enough German yet to be able to order a semmel or to  ask for directions.  After a particularly long day at work, I accidentally transferred to the wrong bus and had no idea where I was, so I asked the driver in my best Genglish… and he suggested (I think) that I should get off and walk two blocks to the East and get on the correct bus.  This is when I got really lost.

I did not yet have a cell phone, and I was really panicked.  It is more than just a little scary to be alone in a foreign country when you cannot speak the language.  I walked, lost and lost in my own worry too.   I came to a small cottage style house which had a huge yard with a stream running though it.  The entire garden was filled with perhaps 200 Garden Gnomes who were working very hard on the property.  They had wheelbarrows and shovels, rakes, buckets, they were crossing the bridge.  Some were on break and sitting on spotted mushrooms, reading books, falling in love, chatting among themselves.  Others were enjoying a lovely picnic.  It was magic.  The property was perfectly meticulous and every single Gnome was well groomed and perfectly detailed as well as situationally detailed.   Seeing them, my worry washed away and I was drawn into their world.  I walked around the little picket fence and looked at each of them, wishing as much now that I had a camera as well as a cell phone, because I thought, no one is going to believe this.  So lovely, so fantastic, I stayed there perhaps an hour watching them.

It was coming to dusk and so I thought I will walk back again about 30 blocks to where I transferred and see if I can get home to my family and I memorized the route as I walked so that I could come back again with a camera.

Eventually, I did get home, and though I tried to get back to show my family that little cottage and the hard working Gnome community, I could never find it or them.  We put miles and miles on our punch buggy looking for them.

Perhaps they were taken, house and all by the Garden Gnome Liberationists?  This rogue organization is connected to the European Gnome Sanctuary is plagued with issues of their own. 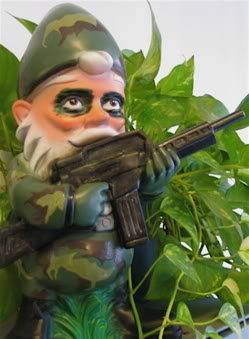 After this, I guess, it is no surprise, I am interested in these wonderful little guys and when I arrived back in Canada, I bought a few Gnomes.  They have become faded and sad looking over the years.  This year with the Tiny House built, I thought I would wash them and repaint them True to the magical Gnome – they come back to life with a bit of attention.

Here is their renewal.  Now I am going to hang out with my Gnomies… Boom-bada-bing!

“To my amazement I have heard that there are people who have never seen a gnome. I can’t help pitying these people. I am certain there must be something wrong with their eyesight.”