In the forests in our area of Ontario there are a lot of places that grow prickly bushes and thorn trees.  The Tiny House Ontario forest is no exception to this.  We have hawthorn, wild roses, black cap and raspberries growing wild as well there are several varieties of thistle including one that tricked me into thinking that it was a soft lovely plant… until it got spikes growing out all over the place.

We also have loads and loads of what we locals call “prickly pear”, I know from looking it up that prickly pear is actually the name of a cactus that grows in the Southern US, but it is not what I have here.  The canes range from ground level to 6 feet in height but they bend down as canes do so the canes can actually be about 10 or 12 feet in length.  They do not have flowers or berries, they have no detectible smell, but they are vicious when you try to walk through them.  The sharp spikes go right through your clothing and dig into your skin.  They take hold of you like velcro and it is difficult to get away.  Walking through them is not, at all, fun. 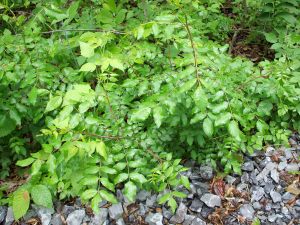 Even though they are wild and unruly, Tiny House Ontario was built right next to a huge stand of them which is both long and wide because many wild animals make it their home and I want to witness them.

In the cloth porch you can always hear them scurrying through.  I stop, listening and hoping to catch a glance.  Sometimes, I see a chipmunk, red squirrel, black/grey squirrel, robins, black snake, and garter snake, woodpeckers, grouse, partridge and loads of other bird varieties, rabbits, coons and even deer and escaped chickens.  We have also heard wolves, coyotes and fishers many times but not caught a glimpse.

I love all animals, and wish they would come out more frequently  but I know that our scent keeps them as well as the more dangerous coyotes, wolves and bears back.

Fishers are about the only exception.  I don’t like them or trust them to stay back.  They seem to have no fear and can confirm I have heard them right up next to the Tiny House screaming like Dementors (from the Harry Potter series) in the night.   These little killers worry me because of my tiny dogs and sadly they are also not natural to here.  I understand that the Ministry brought them in to control the porcupine population.  I grew up here, and know that porcupines are around because we had a dog that was always getting quilled and also because they are sometimes dead on the road.   I know about these little critters, but I am not afraid of a porcupine who need not be feared unless you try to get to close. I wish that people would just leave wild things alone. 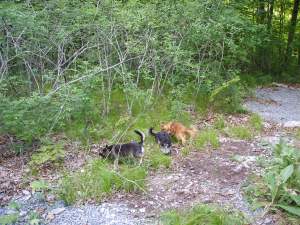